Always on Vpn and Captive Portals

I was attending a meetup that was taking place in a bar in Utrecht. The first thing you want to do is to make a connection to the internet and get started. The location used a captive portal, however. You know: you have the name of the wireless network (SSID) and the password, but when you try to open any web page, you are directed towards a login page where you have to accept the terms and conditions of whoever is operating the network.

But what if you use an always-on VPN? You cannot connect to the network, because your MAC and IP address are not whitelisted yet by the operator. And you cannot get to the login page, because you do not allow any traffic outside your VPN. 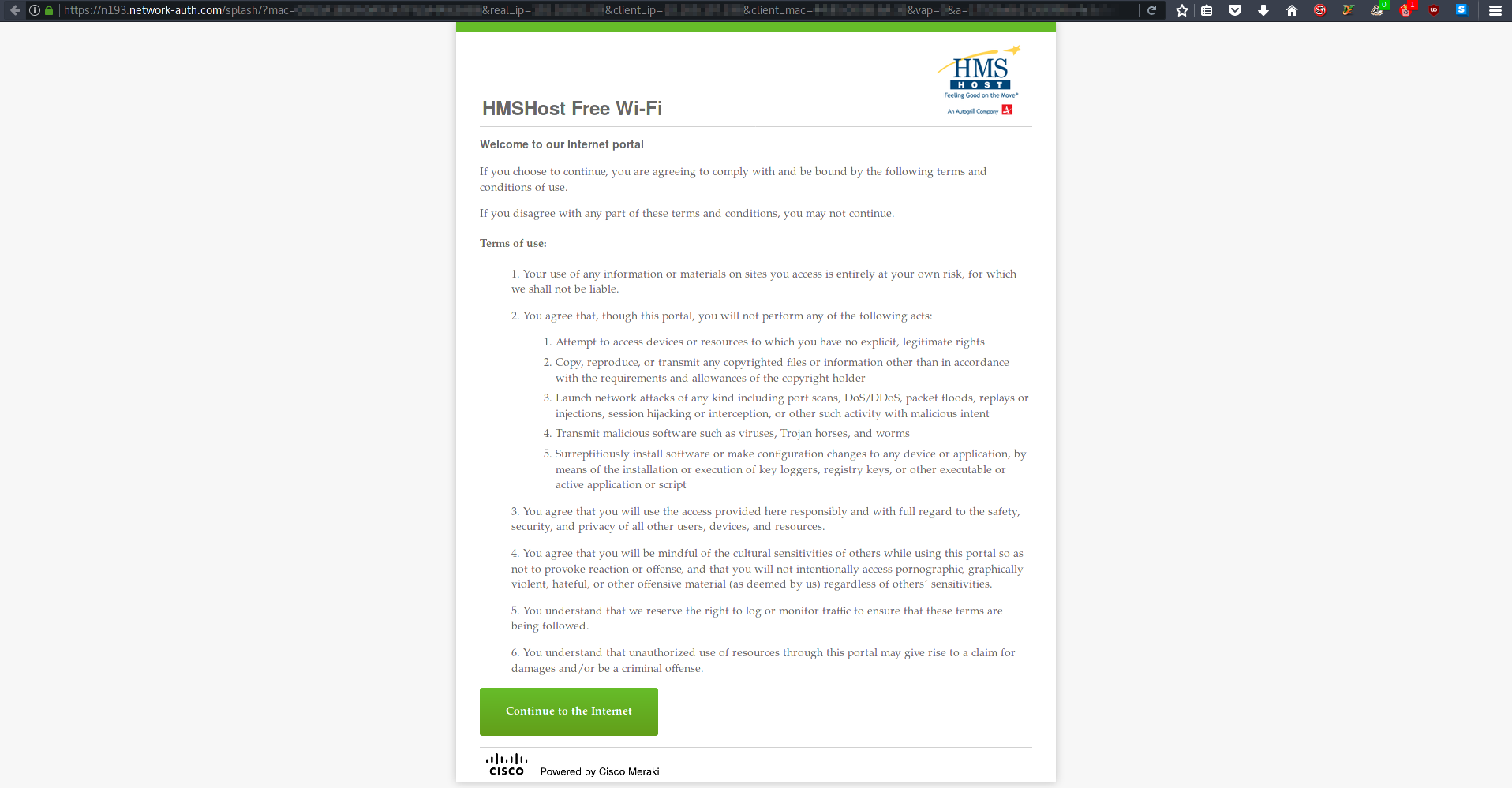 I use ufw (uncomplicated firewall) as my firewall of choice, mainly because the alternative, iptables, always looked too complicated and ufw served its purpose. The rules I have for ufw are currently:

So we need to allow some traffic outside of the VPN tunnel to accept the terms and conditions and to register our machine at the captive portal. The best thing to do would be to allow a single, trusted application to access this portal, one that would be used exclusively for this task. If you would allow you regular browser to bypass the VPN, it would send all kind of traffic over the untrusted network for the rest of the world to freely sniff around in (think add-ons, other browser tabs, automatic updates). So we would need a dedicated web browser for this task. I’m on Linux using Firefox as my default browser, so GNOME Web would be a good choice for this purpose. (Gnome Web was previously known as Epiphany, and is still available under that name on a lot of distributions) .

First, we need to determine what kind of traffic we want to allow. The application will need to have outbound access to ports 80 (HTTP) and 443 (HTTPS) for web traffic, and it will also need to be able to resolve domain names using DNS, so port 53 should also be opened.

However, it’s not that easy to allow one particular application access to the internet if you use UFW. When you look at the man page for UFW, you see you can specify “apps”. Apps (or application profiles) are basically just text files in INI-format that live in the /etc/ufw/applications.d/ folder.

To create a profile for our purposes, we put the following in a file called ufw-webbrowser:

The “ports” field is clarified in the man page:

(Note that we use insert 1 to make sure the rule is placed in the first position. With UFW, the first rule matched wins.)

Now we can use our dedicated browser to go to the captive portal page and accept the terms and conditions.

You need to be careful, however, not to use any other applications during this time. If you launch Firefox, for example, it can also use the opened ports to communicate with the outside world. I’d like to use Wireshark to see what communications are taking place during this time.

When you are registered with the WiFi provider and are done with the captive portal, you should first disable the profile again with UFW. We can do this by specifying the rule we added earlier, but prepending delete:

Another way to delete rules from UFW is by first doing ufw status numbered and then ufw delete <number>. However, since we have added 6 rules, this may take a while. Also, if you can’t remember the exact rule that was used, you can use ufw show added to show all added rules and their syntax.

One solution I’ve read about makes use of what I like to call “the Android way”: every installed application is a user with its own home directory. This means that applications don’t have access to each other files, but more importantly, this gives the opportunity to allow only a specific user to access the internet outside of the VPN. This way, we could create a user epiphany that runs Gnome Web to access the captive portal.

AFWall+, an open-source Android application, uses this method to implement a pretty effective firewall. It also uses iptables as a back-end. I might have to finally bite the bullet and learn iptables after all…